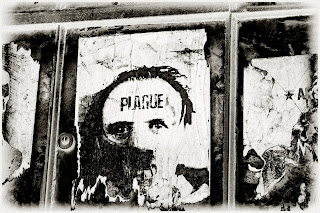 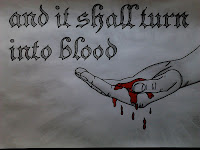 Exodus 7 (A Plague of Blood)
14 Then the LORD said to Moses ... “announce to [Pharaoh], ‘The LORD, the God of the Hebrews, has sent me to tell you, “Let my people go, so they can worship me in the wilderness.” Until now, you have refused to listen to him. 17 So this is what the LORD says: “I will show you that I am the LORD.”  ...
20 ... As Pharaoh and all of his officials watched, Aaron raised his staff and struck the water of the Nile. Suddenly, the whole river turned to blood! 21 The fish in the river died, and the water became so foul that the Egyptians couldn’t drink it...
Pharaoh’s heart remained hard. He refused to listen ... 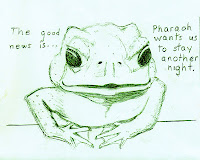 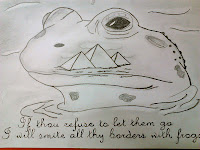 Exodus 8 (A Plague of Frogs)
1 Then the LORD said to Moses, “Go back to Pharaoh and announce ... “2 If you refuse to let them go, I will send a plague of frogs across your entire land. 3 The Nile River will swarm with frogs. They will come up out of the river and into your palace, even into your bedroom and onto your bed! They will enter the houses of your officials and your people. They will even jump into your ovens and your kneading bowls. 4 Frogs will jump on you, your people, and all your officials.’” ...
6 So Aaron raised his hand over the waters of Egypt, and frogs came up and covered the whole land! ...
8 Then Pharaoh ... begged, “Plead with the LORD to take the frogs away from me and my people. I will let your people go, so they can offer sacrifices to the LORD.” ...
10 ...   “All right,” Moses replied, “it will be as you have said. Then you will know that there is no one like the LORD our God...”
15 But when Pharaoh saw that relief had come, he became stubborn.   He refused to listen...

A Plague of Gnats
16 So the LORD said to Moses, “Tell Aaron, ‘Raise your staff and strike the ground. The dust will turn into swarms of gnats throughout the land of Egypt.’” 17 ...  gnats infested the entire land, covering the Egyptians and their animals. ...
But Pharaoh’s heart remained hard.  He wouldn’t listen...


A Plague of Flies
20 Then the LORD told Moses, “... Say to him, ‘This is what the LORD says: Let my people go, so they can worship me. 21 If you refuse, then I will send swarms of flies on you, your officials, your people, and all the houses. ... 22 But this time I will spare the region of Goshen, where my people live. No flies will be found there. Then you will know that I am the LORD and that I am present even in the heart of your land. 23 I will make a clear distinction between my people and your people...” 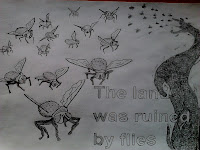 24 And ... The whole land of Egypt was thrown into chaos by the flies.
25 Pharaoh called for Moses and Aaron. “All right! Go ahead and offer sacrifices to your God,” he said. “But do it here in this land.”
26 But Moses replied, “That wouldn’t be right...  27 We must take a three-day trip into the wilderness to offer sacrifices to the LORD our God, just as he has commanded us.”
28 “All right, go ahead,” Pharaoh replied. “I will let you go into the wilderness to offer sacrifices to the LORD your God. But don’t go too far away. Now hurry and pray for me.” ...
32 But Pharaoh again became stubborn and refused to let the people go.

Exodus 9  (A Plague against Livestock)
1 “Go back to Pharaoh,” the LORD commanded Moses. “Tell him, ‘This is what the LORD, the God of the Hebrews, says: Let my people go, so they can worship me. 2 If you continue to hold them and refuse to let them go, 3 the hand of the LORD will strike all your livestock—your horses, donkeys, camels, cattle, sheep, and goats—with a deadly plague. 4 But the LORD will again make a distinction between the livestock of the Israelites and that of the Egyptians. Not a single one of Israel’s animals will die! ...’”
6 ... The next morning all the livestock of the Egyptians died, but the Israelites didn’t lose a single animal. 7 ... But even so, Pharaoh’s heart remained stubborn, and he still refused to let the people go.

A Plague of Festering Boils
8 Then the LORD said to Moses and Aaron, “Take handfuls of soot from a brick kiln, and have Moses toss it into the air while Pharaoh watches. 9 The ashes will spread like fine dust over the whole land of Egypt, causing festering boils to break out on people and animals throughout the land.”...
12 But the LORD hardened Pharaoh’s heart, and just as the LORD had predicted to Moses, Pharaoh refused to listen.

A Plague of Hail
13 Then the LORD said to Moses, “... Tell him, ‘This is what the LORD, the God of the Hebrews, says: Let my people go, so they can worship me. 14 If you don’t, I will send more plagues on you and your officials and your people. Then you will know that there is no one like me in all the earth. 15 By now I could have lifted my hand and struck you and your people with a plague to wipe you off the face of the earth. 16 But I have spared you for a purpose—to show you my power and to spread my fame throughout the earth...  18 So tomorrow at this time I will send a hailstorm...’”

24 Never in all the history of Egypt had there been a storm like that, with such devastating hail and continuous lightning. 25 It left all of Egypt in ruins...  6 The only place without hail was the region of Goshen, where the people of Israel lived.
27 Then Pharaoh quickly summoned Moses and Aaron. “This time I have sinned,” he confessed. “The LORD is the righteous one, and my people and I are wrong. 28 Please beg the LORD to end this terrifying thunder and hail. We’ve had enough. I will let you go ...”
34 But when Pharaoh saw that the rain, hail, and thunder had stopped, he and his officials sinned again, and Pharaoh again became stubborn.  35 Because his heart was hard, Pharaoh refused to let the people leave ...


Exodus 10 (A Plague of Locusts)
... 3 So Moses and Aaron went to Pharaoh and said, “This is what the LORD, the God of the Hebrews, says: How long will you refuse to submit to me? Let my people go, so they can worship me. 4 If you refuse, watch out! For tomorrow I will bring a swarm of locusts on your country...”
7 Pharaoh’s officials now came to Pharaoh and appealed to him. “How long will you let this man hold us hostage?  Let the men go to worship the LORD their God!  Don’t you realize that Egypt lies in ruins?”
8 So Moses and Aaron were brought back to Pharaoh. “All right,” he told them, “go and worship the LORD your God. But who exactly will be going with you?”
9 Moses replied, “We will all go—young and old, our sons and daughters, and our flocks and herds. We must all join together in celebrating a festival to the LORD.”
10 Pharaoh retorted, “The LORD will certainly need to be with you if I let you take your little ones! I can see through your evil plan. 11 Never! Only the men may go and worship the LORD, since that is what you requested.” And Pharaoh threw them out of the palace. ... 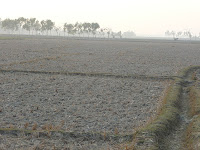 15 ... the locusts covered the whole country and darkened the land. They devoured every plant in the fields and all the fruit on the trees that had survived the hailstorm.  ...
16 Pharaoh quickly summoned Moses and Aaron. “I have sinned against the LORD your God and against you,” he confessed. 17 “Forgive my sin, just this once, and plead with the LORD your God to take away this death from me.” ...
19 The LORD responded by shifting the wind, and the strong west wind blew the locusts into the Red Sea.  Not a single locust remained in all the land of Egypt. 20 But the LORD hardened Pharaoh’s heart again, so he refused to let the people go.

A Plague of Darkness
21 Then the LORD said to Moses, “Lift your hand toward heaven, and the land of Egypt will be covered with a darkness so thick you can feel it.” 22 So Moses lifted his hand to the sky, and a deep darkness covered the entire land of Egypt for three days. 23 During all that time the people could not see each other, and no one moved. But there was light as usual where the people of Israel lived.
24 Finally, Pharaoh called for Moses. “Go and worship the LORD,” he said. “But leave your flocks and herds here. You may even take your little ones with you.”
25 “No,” Moses said, “you must provide us with animals for sacrifices and burnt offerings to the LORD our God. 26 All our livestock must go with us, too; not a hoof can be left behind...”
27 But the LORD hardened Pharaoh’s heart once more, and he would not let them go. 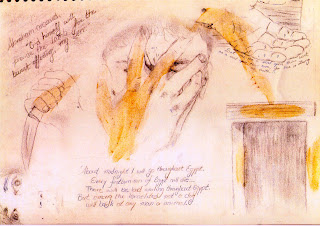 Exodus 11 (A Plague of the Death of the Firstborn)
4 Moses had announced to Pharaoh, “This is what the LORD says: ...  5 All the firstborn sons will die in every family in Egypt, from the oldest son of Pharaoh, who sits on his throne, to the oldest son of his lowliest servant girl who grinds the flour ... 7 But among the Israelites it will be so peaceful that not even a dog will bark. Then you will know that the LORD makes a distinction between the Egyptians and the Israelites.


"Exodus"
Winged messengers of devestation
Brought freedom for your fathers,
And out of heavy darkness
Come your children clothed in light -

His royal priests.  His Holy Nation
Is born of blood-bought brothers
Resplendent in His likeness
Delivered by His might 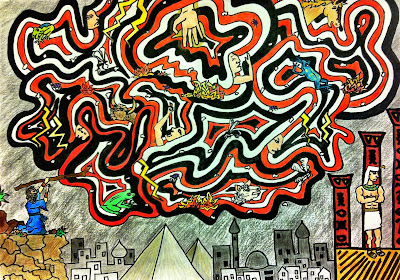 We have a mutual friend. Saying Hi